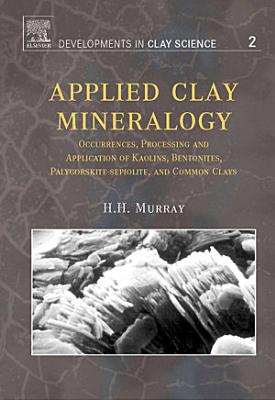 This book on Applied Clay Mineralogy is comprehensive. It covers the structure, composition, and physical and chemical properties of kaolinite, halloysite, ball clays; bentonites including sodium montmorillonite, calcium montmorillonite, and hectorite; and palygorskite and sepiolite. There is also a short chapter on common clays which are used for making structural clay products and lightweight aggregate. The location and geology of the major clay deposits that are marketed worldwide and regionally include kaolins from the United States, Southwest England, Brazil, and the Czech Republic along with halloysite from New Zealand and ball clays from the US, England, Germany, and Ukraine. Bentonites from the U.S. and Europe are included along with palygorskite and sepiolite from the U.S., China, Senegal, and Spain. The mining and processing of the various clays are described. Extensive discussions of the many applications of the clays are included. The appendices cover the important laboratory tests that are used to identify and evaluate the various types of clay. Many figures are included covering electron micrographs, processing flow sheets, stratigraphy, and location maps. * Provides the structure and composition of clay minerals, as well as their phyisical and chemical properties * Discusses pplications for Kaolin, Bentonite, Palygorskite and Sepiolite * Contains appendixes of laboratory tests and procedures, as well as a test for common clays