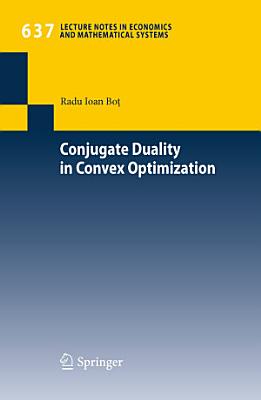 The results presented in this book originate from the last decade research work of the author in the ?eld of duality theory in convex optimization. The reputation of duality in the optimization theory comes mainly from the major role that it plays in formulating necessary and suf?cient optimality conditions and, consequently, in generatingdifferent algorithmic approachesfor solving mathematical programming problems. The investigations made in this work prove the importance of the duality theory beyond these aspects and emphasize its strong connections with different topics in convex analysis, nonlinear analysis, functional analysis and in the theory of monotone operators. The ?rst part of the book brings to the attention of the reader the perturbation approach as a fundamental tool for developing the so-called conjugate duality t- ory. The classical Lagrange and Fenchel duality approaches are particular instances of this general concept. More than that, the generalized interior point regularity conditions stated in the past for the two mentioned situations turn out to be p- ticularizations of the ones given in this general setting. In our investigations, the perturbationapproachrepresentsthestartingpointforderivingnewdualityconcepts for several classes of convex optimization problems. Moreover, via this approach, generalized Moreau–Rockafellar formulae are provided and, in connection with them, a new class of regularity conditions, called closedness-type conditions, for both stable strong duality and strong duality is introduced. By stable strong duality we understand the situation in which strong duality still holds whenever perturbing the objective function of the primal problem with a linear continuous functional.