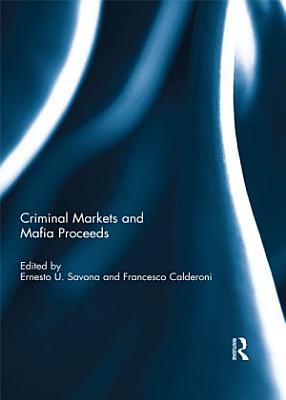 This book estimates the proceeds of crime and mafia revenues for different criminal markets such as sexual exploitation, drugs, illicit cigarettes, loan sharking, extortion racketeering, counterfeiting, illicit firearms, illegal gambling and illicit waste management. It is the first time that scholars have adopted detailed methodologies to ensure the highest reliability and validity of the estimation. Overall, estimated proceeds of crime amount to € 22.8 billion: 1.5% of the Italian GDP. Of this, up to € 10.7 billion (0.7 of the GDP) may be attributable to the Italian mafias. These figures are considerably lower than the ones most frequently circulated on the news, without any details about their methodology, which were defined by a UN study as "gross overestimates". Far from underestimating criminal revenues, the results of this study bring the issue of the proceeds of crime to an empirically-based debate, providing support for improved future estimates and more effective policies. The volume’s contributions were inspired by a project awarded by the Italian Ministry of Interior to Transcrime, which produced the first report on mafia investments (www.investimentioc.it). This book was originally published as a special issue of Global Crime.

Authors: Ernesto U. Savona
Categories: Social Science
This comprehensive volume analyzes dual markets for regulated substances and services, and aims to provide a framework for their effective regulation. A “dual

Authors: Alina Mungiu-Pippidi
Categories: Political Science
This volume on Government Favouritism in Europe reunites the fieldwork of 2014-2015 in the ANTICORRP project. It is entirely based on objective indicators and o

The Threat of Russian Organized Crime

Authors: Ernesto U. Savona
Categories: Business & Economics
The infiltration of organised crime in the legitimate economy has emerged as a transnational phenomenon. This book constitutes an unprecedented study of the inv