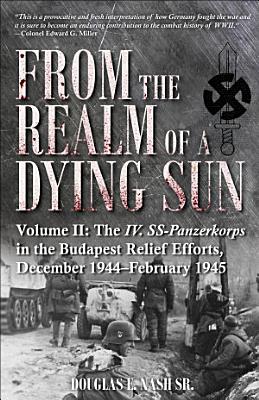 “A veritable tour de force of Eastern Front armored combat replete with slashing counterattacks, defending to the last man, and overcoming odds.” —Mark J. Reardon, author of Victory at Mortain On Christmas Eve 1944, the men of the IV. SS-Panzerkorps and its two divisions—the 3rd SS Panzer Division “Totenkopf” and the 5th SS Panzer Division “Wiking”—were eagerly anticipating what the holiday would bring, including presents from home and perhaps sharing a bottle of schnapps or wine with their comrades. This was not to be, for that very evening, the corps commander, SS-Obergruppenführer Herbert Otto Gille, received a telephone call notifying him that the 35,000 men of his corps would begin boarding express trains the following day that would take them from the relative quiet of the Vistula Front to the front lines in Hungary, hundreds of kilometers away. Their mission: Relieve Budapest! Thus would begin the final round in the saga of the IV. SS-Panzerkorps. In Hungary, it would play a key role in the three attempts to raise the siege of that fateful city. Threatened as much by their high command as by the forces of the Soviet Union, Gille and his troops overcame seemingly insurmountable obstacles in their attempts to rescue the city’s garrison, only to have their final attack called off at the last minute. At that moment, they were only a few kilometers away from the objective towards which they had striven for nearly a month. After the relief attempt’s failure sealed the fate of hundreds of thousands of Hungarians and Germans, the only course of action remaining was to dig in and protect the Hungarian oilfields as long as possible.

Authors: Douglas E. Nash
Categories: History
An account of the IV SS-Panzerkorps, an SS corps that participated in many of the key battles fought on the Eastern Front during the last year of the war.

Authors: Douglas E. Nash
Categories: History
An “excellent and thought provoking” chronicle of the IV. SS-Panzerkorps in Hungary and Austria in the last months of World War II, with maps (Globe at War)

Authors: Arthur W. Gullachsen
Categories: History
South of the Norman city of Caen, the twin features of the Verrières and Bourguebus ridges were key stepping stones for the British Second Army in late July 19

Bloody Verrières: The I. SS-Panzerkorps Defence of the Verrières-Bourguebus Ridges

Authors: Arthur W Gullachsen
Categories: History
South of the Norman city of Caen, Verrières Ridge was seen a key stepping-stone for the British Second Army if it was to break out of the Normandy bridgehead i

Tanks in the Battle of Germany 1945

The Routledge History of the Second World War

Authors: Paul R. Bartrop
Categories: History
The Routledge History of the Second World War sums up the latest trends in the scholarship of that conflict, covering a range of major themes and issues. The bo

Gene Wolfe's The Book of the New Sun

Authors: Michael Andre-Driussi
Categories: Literary Criticism
A guide to Gene Wolfe's series The Book of the New Sun, and the sequel The Urth of the New Sun, as well as four shorter "New Sun" works. Designed for use by fir

The Tibetan Book of the Dead

Authors: Padmasambhava
Categories: Religion
The Tibetan Book of the Dead: Awakening Upon Dying, with introductory commentary by Dzogchen Buddhist master Chögyal Namkhai Norbu, is a new translation of the

Authors:
Categories: Religion
This volume fills a lacuna in the academic assessment of new religions by investigating their cultural products (such as music, architecture, food et cetera). C