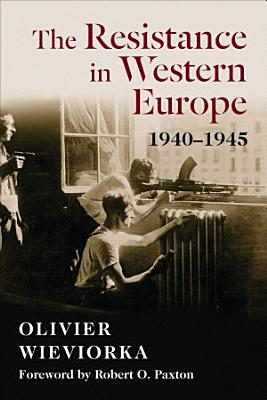 In just three months in 1940, Denmark, Norway, Belgium, the Netherlands, Luxembourg, and France fell to the Nazis. The German occupation of Western Europe had begun—but a brave few rose up in defiance. National resistance has long been celebrated in remembrances of World War II, depicted as making significant contributions to the defeat of Nazi Germany. However, the so-called army of shadows drew heavily on the support of London and Washington, a fact often forgotten in postwar Europe. The Resistance in Western Europe, 1940–1945 is a sweeping analytical history of the underground anti-Nazi forces during World War II. Examining clandestine organizations in Norway, Denmark, the Netherlands, Belgium, France, and Italy, Olivier Wieviorka sheds new light on the factors that shaped the resistance and its place in the grand scheme of Anglo-American military strategy. While national actors played a leading role in fomenting resistance, British and American intelligence services and propaganda as well as financial, material, and logistical support were crucial to its activities and growth. Wieviorka illuminates the policies of governments in exile and resistance actors regarding cooperation with the British and Americans, pointing to the persistence of national self-interest and long-standing historical tensions. Drawing on a wide range of archival sources and bringing together the political, diplomatic, and military dimensions of the conflict, this book is the first account of the resistance on a continental scale and from a trans-European perspective.

Authors: Olivier Wieviorka
Categories: History
In just three months in 1940, Denmark, Norway, Belgium, the Netherlands, Luxembourg, and France fell to the Nazis. The German occupation of Western Europe had b

Authors: Bob Moore
Categories: History
This text provides an analysis of individual national historiographies on resistance movements in Western Europe in World War II. It discusses the debates they

A Political History of Western Europe Since 1945

Authors: Gustaaf Geeraerts
Categories: History
This is a collection of the 13 essays making up the proceedings of the 2nd international working conference on violence and non-violent action in industrialized

The Moment of Liberation in Western Europe

Authors: Gerd-Rainer Horn
Categories: History
The Moment of Liberation in Western Europe, 1943-1948, regards the final two years of World War II and the immediate post-liberation period as a moment in twent

The Era of World War II

Authors: Martin Conway
Categories: History
A major new history of how democracy became the dominant political force in Europe in the second half of the twentieth century What happened in the years follow

An Economic and Social History of Western Europe since 1945

Authors: Anthony Sutcliffe
Categories: History
This is the ideal companion text to A Political History of Western Europe Since 1945. It is an introductory survey which explains how western Europe built up it